During The Tall Ship Glenlee’s 125th celebrations the Clyde Maritime Trust announced ambitious plans to ensure the Clyde-built vessel is ship shape for future generations to learn and enjoy from its unique maritime past. 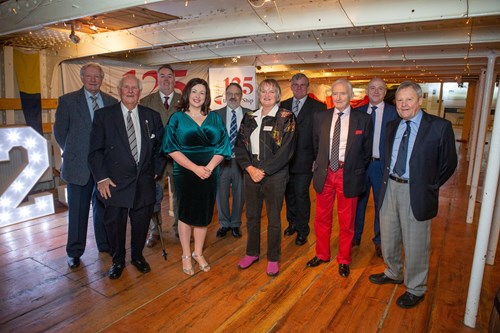 Launched on the 3rd of December 1896 the ship changed name and function several times that ultimately ensuring it is still afloat today. As historic ships go, Glenlee is a survivor, making it one of the last 3 masted Clydebuilt ships afloat in the UK, having been passionately restored to provide a unique space for learning, heritage, and entertainment.

Amongst the plans announced the charity that owns the ship intends to change its name to The Tall Ship Glenlee Trust, to ensure the charitable status of the Glenlee is better understood by visitors.

Glasgow comedy legend Elaine C Smith recently added her support to the charity's endeavours after discovering the figurehead upon the ship was named by the volunteers who restored her after her character ‘Mary Doll’. 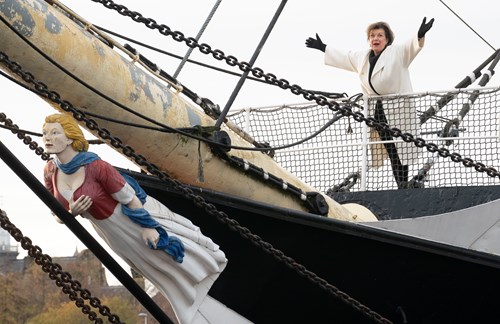 Since re-opening as Covid-19 restrictions eased, the trustees, volunteers, and staff have also worked together to refresh their vision to inspire people worldwide in the history and development of the iconic ship, Glenlee, through enjoyable, engaging, and informative experiences.

To signal these changes the Chair, Colin Botfield, announced proposals to broaden the diversity of the trustees and additional funding from Glasgow City Council to strengthen the leadership team with recruitment for a new CEO and Development Director. 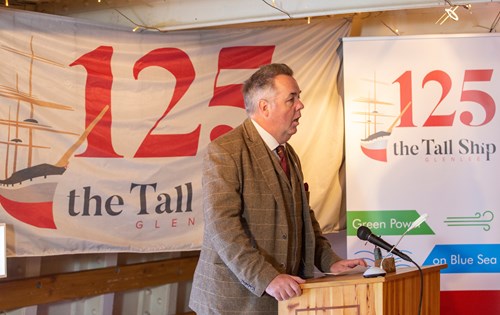 Colin Botfield said.  “Our refreshed vision and ability to be ship shape for change sees us as a sustainable high-quality visitor attraction for future generations. In practical terms this means recruiting new trustees and staff, reaching out to user groups and funders and contractors for our ongoing programme for repairs and improvements, refreshing our interactive exhibits. I am delighted to see so many of these groups so important to our future being here tonight. The renewed focus on the ship has also seen the Trustees agree to change the name of the Clyde Maritime Trust to the Tall Ship Glenlee Trust.” 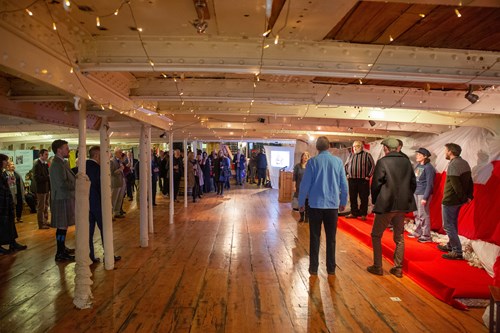 The announcements were made as part of the 125th Anniversary Celebrations on board as supporters and volunteers gathered to mark this historic date. The Lord Provost Phillip Braat was among the speakers paying tribute to the work that has ensured The Tall Ship Glenlee is one of Glasgow’s iconic visitor attractions.

The Lord Provost Phillip Braat said. “The Glenlee has been part of the Glasgow Skyline for the last 25 years or so but she has been an ambassador for shipbuilding on the Clyde. The many Trustees, volunteers and staff who have served to keep her afloat since she was rescued from Spain in 1992 are a credit to the ship and the city.” 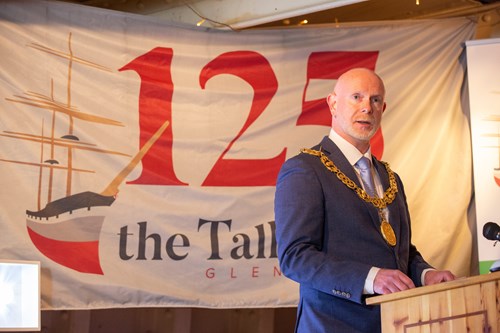 The evening also had an international flavour, with the Consul General of Spain, Ignacio Cartagena-Nunez among the guests paying tribute to the Glenlee, after it spent much of its life as a Spanish Naval training vessel under the name ‘Galatea’.

The wider celebrations also included artist Bruce Newlands of TRANCND projecting images on the neighbouring Riverside Museum of the ship over the years, and also paying homage in Port Glasgow, Inverclyde at the Bay Yard by shipbuilder Anderson Rodger where the Glenlee was originally launched 125 years ago.

To round off the weekend of celebrations the Director of National Historic Ships, Hannah Cunliffe, will be presenting the annual lecture on Monday the 6th of December entitled.  "...a tall ship and a star to steer her by, Setting a Course for the Future of Maritime Heritage. This follows on from the recent award of Static Flagship of the Year 2021 by National Historic Ships, the official organisation for over 1300 historic vessels around the UK.=

The Tall Ship Glenlee remains a popular visitor attraction and venue with several festive events planned this December including Santa’s Magical Express which starts this weekend.

All of these events and activities are of course impossible without the volunteers, supporters and donors over the years who have contributed to the restoration and maintenance of the Glenlee. To that all those gathered at the celebrations were able to toast the health of the ship with a commemorative 125th Anniversary Glenlee Whiskey produced by ACEO.

“Uisge Beath and fair winds to the good ship Glenlee.”