The Galatea years are an incredibly important part of the ship’s history. Being purchased by the Spanish Navy and transformed into a sail training vessel meant that the ship was able to serve a new purpose, and survive long after the end of its days as a cargo vessel. Galatea had a long career with the Spanish Navy, and is still of iconic significance in Spain today. Thousands of men sailed on Galatea, and the ship was beloved by former crew members long after they left. 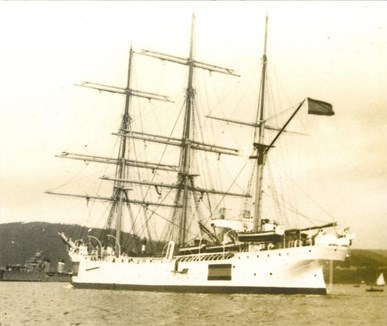 Like all ships at the time, Galatea was affected by the Second World War. The ship operated as a neutral vessel. Voyages were restricted throughout this period, and the Spanish flag was painted on both sides of the ship to deter potential submarine attacks.

Galatea travelled extensively throughout its long career at sea, covering more than one-hundred and eighty-one thousand nautical miles between 1944 and 1959. Between 1953 and 1959, the ship made seven transatlantic crossings.  This would have been a valuable education for the cadets, who learnt the skills needed to work at sea and gained experience working as part of a ship’s crew.

Galatea continued to face challenges at sea during the 1940s and 1950s. The ship was caught in a hurricane force storm in October 1946, while departing Punta Delgada. The storm was so severe that half a ton of oil was poured onto the water, in an attempt to calm the sea. As a result, the rigging was stripped and the engine room was flooded. The pumps had to operate constantly until the vessel was able to enter Las Palmas and undergo an extensive refit.

Galatea crossing the equator in 1958

The vessel encountered one of the most severe storms it had seen in January 1954, while returning from a transatlantic voyage to New York and Puerto Rico. The storm was so extreme it led to twenty cadets being injured and the loss of seven sails. Again, Galatea had to undergo significant repairs as a result of this storm. 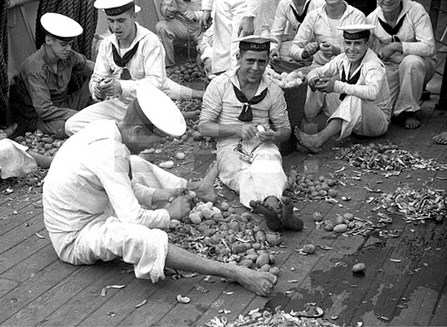 Cadets peeling spuds on Galatea in 1950

1959 is a significant date in the history of The Tall Ship Glenlee, as the two voyages that year marked the end of this ship’s days as a seagoing vessel. During those last days at sea, Galatea travelled to Colombia, Brazil, Liverpool, New York, the Caribbean, and the area now known as Senegal. Several of the men who sailed on Galatea during its last days at sea continued to have vivid and fond memories of that time for many years.

If you would like to know more about the next chapter in the exciting history of The Tall Ship Glenlee, look for our article next week.