The Tall Ship, Glenlee has been highlighted by National Historic Ships for its leading use of renewable energy, and not the wind that powered the ship, but from the Clyde waters it floats upon.

With the assistance of the Scottish Government’s Community & Renewable Energy Scheme the heat source pump was developed for use in the River Clyde to heat the ship. In moving to the current berth by the Riverside Museum in 2010 this seemed natural to implement a renewable energy system as renewable energy had powered the ship so successfully for most of its life.

The recently published National Historic Ships Climate Change Report highlights that the Tall Ship Glenlee was one of the first structures in Scotland to benefit from the technology that has reduced emissions and cut energy bills of the charity for the past decade. 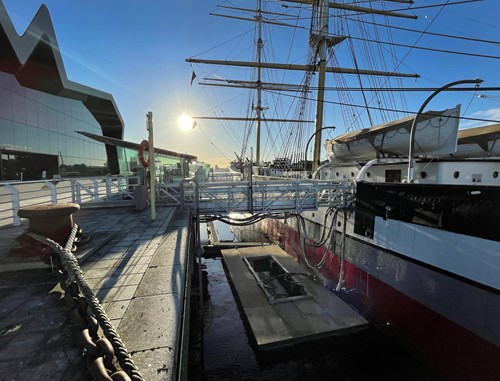 Over ten years later the system is still heating the ship with a similar system now being proposed as part of Glasgow’s Greenprint to heat parts of the city using the waters of the Clyde with heat source pumps from the River Clyde.

Titanium panels or ‘Slim-Jim’s act as heat collectors suspended below a pontoon alongside the historic vessel. Lines run towards heat pumps carrying glycol brine mixture which exploit a temperature differential as it is compressed and condensed in the cycle which raises its temperature by at least 3C. This energy is enough to power heat pumps which then warms water to around 50C into a more traditional wet water radiator system.

With the UN Climate Change Conference arriving in Glasgow in a month’s time there is much to learn from the Tall Ship Glenlee history in adapting to change, which has often led the way in sustainable technology from when it was built at the height of wind powered cargo vessels in 1896.

The Tall Ship Glenlee will be closed from the 23rd October until the 17th November over COP 26 as it sits within the outer security perimeter of the international conference that focuses upon countering climate change on a global scale. Bookings for the popular learning programme and events remaining available via the website during this time.