The Last Voyage of the Islamount

The eighteen years spent as Islamount was a fascinating period, encompassing the First World War and one of the ship’s most extraordinary voyages. The Islamount era also marked the last years of the ship’s life as a sailing vessel, as engines would be installed by the next owners. This period continued to have an impact many years later, with photographs of Islamount in Australian ports used as references in the restoration of the vessel in the 1990s. 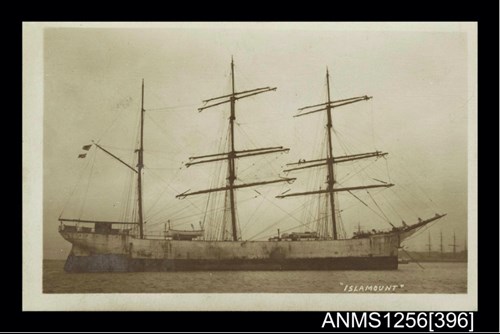 As with the majority of ships, the First World War had a considerable impact on Islamount. The vessel was requisitioned by the Ministry of Shipping in early 1918, and run on behalf of the government by John Stewart & Co, Ltd. The war also had an impact on the final and longest voyage this ship undertook as Islamount.

The last voyage of the Islamount lasted from 18th May 1916 until 20th October 1919. David George served as captain throughout the long journey. Originally from Pembrokeshire, Captain George had spent his life at sea since the age of 14. When the voyage began, the crew consisted of the captain, first mate, bosun, cook, steward, sailmaker, carpenter, thirteen general crew, and six apprentices. 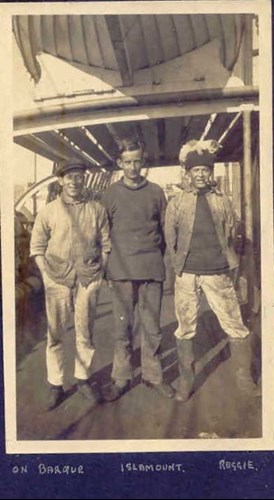 Apprentices had an interesting role on ships such as Islamount. They were young men, sometimes as young as 14, whose families would pay the captain to take their son on as an apprentice. They were expected to do the same work as the rest of the crew but slept in a separate area, and there are even stories of apprentices being given extra portions at mealtimes.

We have been able to learn more about the role and experiences of apprentices in recent years, thanks to the research of our trustee Elizabeth Allen, and the kind donation from Stephanie Champion of her grandfather’s log. He was Ernest Andersen, who served as an apprentice during the Islamount years and kept a personal log of his experiences and many adventures. We hope to use this unique source in our onboard interpretation very soon.

While it would have been a remarkable adventure, those sailing on the last voyage of the Islamount faced many challenges. The ship eluded the dangers of enemy U-boats throughout the war years, as German submarines operated under a policy of unrestricted submarine warfare in the North Atlantic Ocean. The crew turnover during the period was high, with several crew members deserting or leaving due to illness. A dangerous incident occurred when the ship left Melbourne for Bordeaux in February 1917. While Islamount was being towed from the harbour by the tug James Patterson, the tow rope of the tug snapped when passing through a rip current at Point Nepean. The ship was left drifting with a large amount of water on board. The third attempt to resolve the issue succeeded and the ship was able to continue with the journey.

Image of the damage incurred in the hurricane on 23rd May 1918. Image courtesy of Sue and Pat Grant.

Islamount again ran into trouble on 23rd May 1918, encountering a hurricane that almost sank the ship. The damage was significant. The topsails were lost, cargo shifted, and the ship was left lying on its side. The crew hung to the yards throughout the night until the weather finally improved in the morning. What a terrifying night that must have been! Under a temporary rig, the ship was finally able to reach the safety of Sydney a month later.

The crew was overjoyed to hear of an armistice to the war when they arrived in Cape Town in November 1918. However, the challenges continued even after this. For example, black labour workers at the dock in Cape Town were experiencing significant challenges, which led to significant unrest in the area and intermittent strikes, which affected the loading and unloading of cargo.

The challenges would continue in the last part of the ship’s remarkable final voyage under the name Islamount. The story continues with our article next week.

Also, if you are interested in the last voyage of the Islamount, keep an eye out for our exhibition on the subject next time you visit The Tall Ship Glenlee.

Article by Amy McInulty, with contributions from Lauren Henning.